How to Remove Thistles from Your Garden 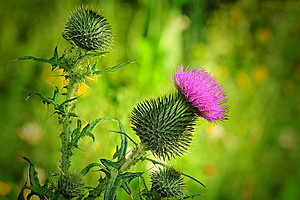 Weeds are usually a menace in any garden or farm, and gardeners try very much to get rid of them. Thistles are one of the toughest weeds that are so difficult to eliminate. Sometimes, it takes strong will and persistence to get rid of them. When trying to kill thistle weeds, the result may affect other plants around it. There are several methods that are quite effective in reducing the menace or eliminating this weed.

If you detect the presence of thistles in your garden early enough, you may be able to eliminate them manually. At that time, they may just be in an isolated area of the garden and still be few. Using protective gloves, you can use shears to cut down the stalk and immediately put them in a trash bag.

Then you use a spade to dig out the base of the plant. Make sure that root is completely removed, and then you throw in it the trash bag too. Wash your tools well to make sure that no seed is left on them.

Mowing down the weed

You can now again every time you notice a regrowth of the weed. After mowing, you can also apply a herbicide active against thistles on the area.

You can use a tiller to break up the soil when you observe thistles in a patch of your garden. Breaking the soil to expose the roots can help to kill the weed. Make sure that the roots are completely exposed and get the chance to dry up.

Herbicides that contain glyphosate work effectively against thistles; however, they are dangerous to other plants, animals, and humans. If applying such herbicide, it is better to use it early in the season so that it gets enough time to work effectively.

When applying it, you need to be well protected. Wear your overall, gloves, and dust mask when you want to spray it. After you spray, it is important that you do not allow livestock into the garden during the period of the treatment.

When the thistles grow back, you should apply the weed treatment again. When you do this for several seasons, you will gradually weaken the presence of the weed in your garden. Glyphosate herbicide can affect other plants that are in the garden once they come in contact with it.

Selective herbicides suitable for eliminating thistles contain clopyralid or triclopyr. This does not necessarily affect other plants in the garden. Rather, it will have its effect on the thistle weed alone. Following the instructions on the label, you can constitute the herbicide and apply it to your garden.

As you apply it, be careful to reduce contact with other relevant plants. Even though such herbicides are very effective, the weed may still grow back again. You can reapply the herbicide to them. The herbicide will gradually destroy the roots and prevent the seeds from growing back.

There are plants that can be used to reduce the number of nutrients that the thistle weed can access in the garden. One of such plants is alfalfa. This plant takes up much of the nutrients in the soil before the thistles can get a chance to use them.

There are also economic grasses that you can plant that also utilize high amounts of nutrients. Thistles will not stand much chance with such plants. One of such grasses is the Alta tall fescue grass.

When you get your seeds, spread them in the soil around the thistles. Using a rake, you mix them well in the soil. Water morning, afternoon, and night or up to four times in a day. As your grasses grow, you can reduce the amount of water that they get and give them time to utilize the nutrients in the soil.

With time, these plants will help you to reduce the presence of thistles in your garden, even though they may not get completely eliminated.

Allowing livestock and insects to prey on them

Many livestock eats thistles, so you can release them into your garden to prey on them. This is a natural way of keeping thistles under control. The livestock will not eliminate thistles from your garden but will keep them in check.

Thistles may be harmful to some livestock, but animals like goats can feed on them. However, if there are other plants in your garden, the animals may likely destroy them as well. Some bugs and weevils also eat them.

You can even buy stem mining weevils and release them around the weed. It may, however, not be advisable to release insects into your garden as they may later constitute nuisance themselves.

Covering the patch of thistles with a flat cover that does not allow air to penetrate can suffocate them. You can use wood or a flat metal to cover the thistles. This will prevent them from getting sunlight and air. It will suffocate them after a long period of time.

Put 20% potent white vinegar in a spray bottle and spray it generously on the weed. It will take up to a week for it to dry up the thistles.

Once they are dead, you can pull out the roots of the weed and dispose of them outside the garden. You can repeat this process every time you notice the thistles coming up again.

Thistles may not be poisonous to humans, but their prickly effect may seem irritating. Besides, they will be competing for nutrients with other plants in the garden. This is why it is not advisable to allow them to thrive in your garden.

There are a number of ways to keep thistles under check in your garden. With the methods in this article, you can achieve a thistle-free garden.

Thank you so much for reading this article and if you have a question or something that you want to share, please kindly leave your comment below, and I will be happy to write back to you.