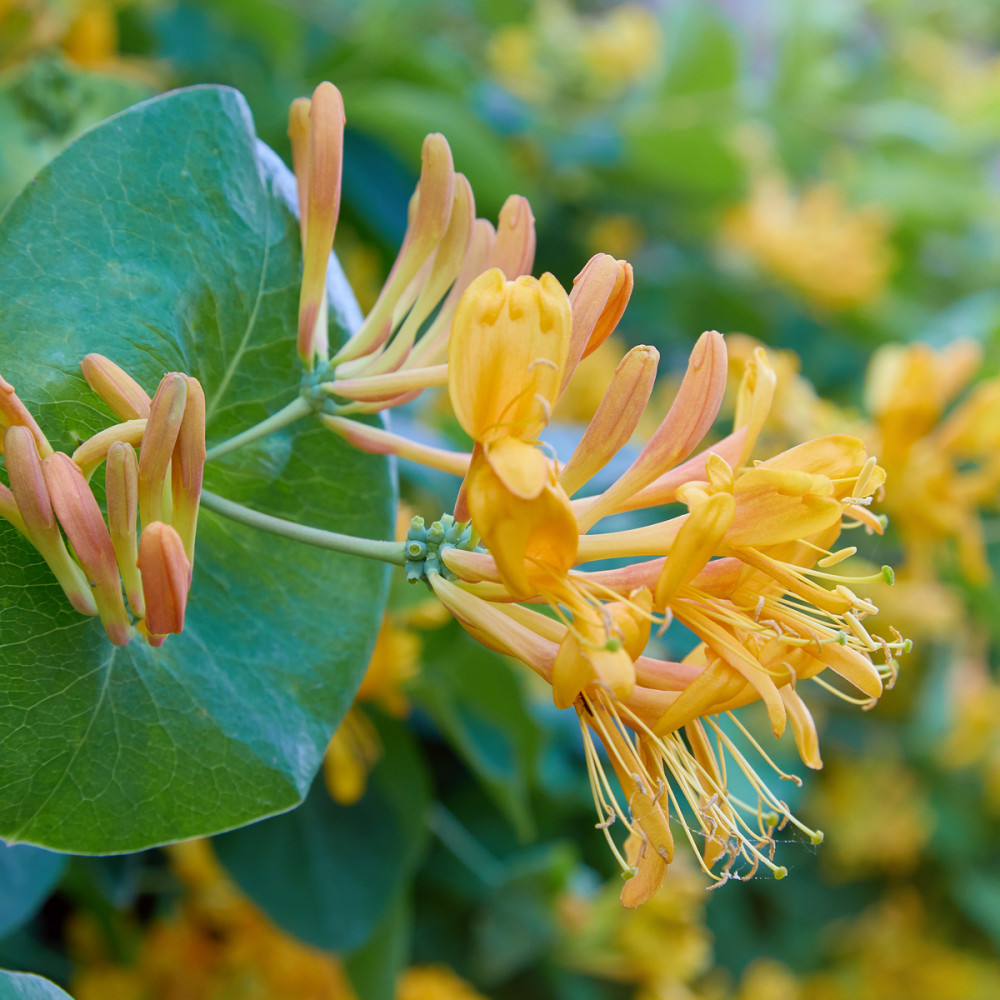 Honeysuckles are attractive plants that smell nice and grow like bushes and vines. They, however, have fast growth and can take over small plants in the garden. Pruning honeysuckle every year will help contain the shrub or vine.

1. The bushes have to be pruned between April and June. To make sure that the branches are blooming, it is advisable to wait until it’s after the flowering season. When the plant has bloomed, look for the branches that didn’t bring forth any leaves or flowers and cut them off.

2. Broken, dead, or unhealthy branches should be removed. Search the garden for dead or diseased branches that didn’t bring forth leaves or blooms. Note down areas where the branches have broken or bent. Look around the plant’s bottom, search for any fallen branch with bugs, pests, or withered leaves.

3. The pruning scissors must be held at an angle of 45-degrees. You can prevent the stem from rotting and also ensure that water runs off the stem well if you cut it off at an angle. Avoid cutting the branches straight across because it can cause the rest of the branch to die if water ponds on the surface. It can also make pest drill holes into the branches.

4. Branches should be cut in 0.64 cm in the front of a bud. If you leave a tiny bit of an old branch, it might grow back again. To see a bud, search for an area where a leaf or a branch meets the branch you want to trim off.

5. Increase the amount of light and air-flow by removing a few branches from the middle. Pick some healthy, long stems in the middle of the bush and cut them close to the bush center. This will give way to more sunshine and air to enter into the middle and low parts of the bush, thus promising better growth.

1. The best season to shape and prune the vines is in the late summer. Honeysuckle vines have quick growth, and they spread out when it is blooming season. When the season has passed, the plant should be reshaped to a good size.

2. Before pruning, trim any dead stem or withered flower. Remove brown flowers or leaves with your hands or pruning scissors before you start to shape them to perfection. This will give you have a better view of the shape and size of your vine. It also shows you the parts of the vine that needs attention.

4. Cut above the nodes of the leaves with sharp pruning scissors. Leaves begin to form from a parent stem in the leaf nodes. Make a clean cut across the stem while holding your scissors at a 45-degree angle.

1. The overgrown honeysuckle should be pruned when it is winter. Honeysuckle bushes and vines are inactive during the winter, and if you prune them too hard, they won’t be harmed. Avoid the flowering period by targeting early winter. Late winter pruning is also acceptable as long as the plant is not growing anew.

2. Overgrown plants should be trimmed down within 1 ft. of the ground. Trim the stems to the point that only 1 ft. of it remain with your hands. The plant will not produce flowers for about 2 – 3 years, but it will continue to grow.

3. Only 1/3 of the branches should be cut away if you want to bloom that year. If you want a steady growth of the plant, cut away only 1/3 of the plant. To do this, start at the top of the bush and slowly move to the bottom. The remaining branches will still produce flowers in the coming spring.

There are a few tips that help to maintain healthy honeysuckle in the post as well. The article’s main objective is to guide you on how to prune your honeysuckle without any complications.

How to Kill Weeds Naturally in Rocks

Tips to Garden in a Mediterranean Region

We use cookies on our website to give you the most relevant experience by remembering your preferences and repeat visits. By clicking “Accept All”, you consent to the use of ALL the cookies. However, you may visit "Cookie Settings" to provide a controlled consent.
Cookie SettingsAccept All
Manage consent

This website uses cookies to improve your experience while you navigate through the website. Out of these cookies, the cookies that are categorized as necessary are stored on your browser as they are essential for the working of basic functionalities of the website. We also use third-party cookies that help us analyze and understand how you use this website. These cookies will be stored in your browser only with your consent. You also have the option to opt-out of these cookies. But opting out of some of these cookies may have an effect on your browsing experience.
Necessary Always Enabled
Necessary cookies are absolutely essential for the website to function properly. This category only includes cookies that ensures basic functionalities and security features of the website. These cookies do not store any personal information.
Non-necessary
Any cookies that may not be particularly necessary for the website to function and is used specifically to collect user personal data via analytics, ads, other embedded contents are termed as non-necessary cookies. It is mandatory to procure user consent prior to running these cookies on your website.
SAVE & ACCEPT